Home
Guides
How To Choose The Best Torch For Security?
Check our guides
Learn More!

A good torch for security should be bright, hardy, and versatile. The number of lumens is important but not the only feature to consider. Light modes, how far the light can reach and the ability to zoom the light are also important.

What To Consider When Choosing The Best Torch For Security

Let’s start with the most important feature – brightness.

The brightness of a flashlight is measured in lumens. The higher the lumens the brighter the torch is and the wider of an area it can light up.

Some torches are like small suns, able to turn a large area into daylight.

For most security applications, a 1,000-2,000 lumens torch is bright enough to illuminate dark areas.

If you’ll be working outdoors and need to illuminate a large area, look for a brighter torch – 2,000 lumens or more should do.

At around 10,000 lumens you have all the brightness you need for security.

Check whether you can adjust the brightness of the torch. Most torches for security have three levels of brightness: low, medium and high.

This allows you to adjust the brightness of the torch for different situations.

In addition, most security torches have a strobe mode plus an SOS mode.

Some torches produce a wide beam of light (they have high lumens), making them great for lighting up a large area.

Others produce a more focused beam of light (they have a higher Candela value) and are ideal for focusing on small areas close or far away. Some torches can illuminate objects as far as 500 metres.

But what if you could get both types of light in one torch?

That’s what a zoomable flashlight offers. By twisting the head of the torch, you can adjust focus or zoom from a wide floodlight to a narrow spotlight depending on the situation.

We highly recommend getting a torch with a rechargeable battery. This saves you the trouble of constantly buying new batteries.

Check the capacity of the battery and how long it runs in different light modes. Make sure that the torch can provide illumination through the night.

By the way, make sure the torch has some sort of battery level indicator so that you can monitor how much charge is remaining.

Something else to check is whether the torch can run on regular AAA batteries. This provides a backup power option just in case the main battery runs out.

A good torch for security needs to be hardy enough that it can withstand some water and being dropped.

Check the IP rating for the torch. The best security torches have an IP67 rating. That means the torch is fully dustproof and can survive being immersed in water (up to 1m for no more than 30 minutes).

A lower rating like IP65 is still good since it indicates you can safely use the torch in the rain but don’t drop it in water.

Also, check that the torch is well built and can withstand a substantial fall. Some torches are so solidly built that they can be used as weapons in an emergency.

Most security torches are typically made with aluminium to keep them hardy and lightweight. It also prevents rust.

Here are some extras to look for when choosing a security torch. 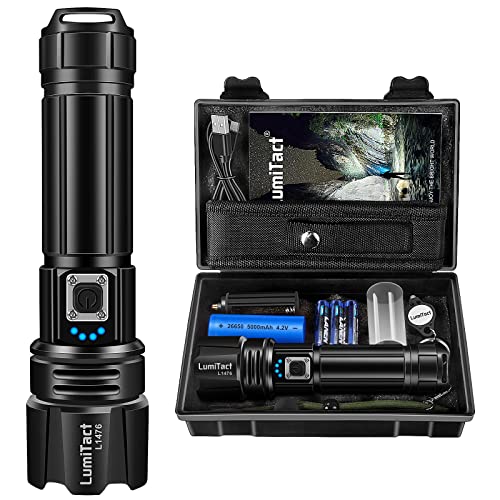 The Lumitact rechargeable LED torch is one of the best torches for security. It’s super bright, well built and comes packed with a ton of features.

At 10,000 lumens, this is one of the brightest torches for security. It’s perfect for illuminating large areas such as the outdoors.

Using the power button, you can switch to one of five light modes. Three of these are for brightness level – high, medium and low light – while the other two are strobe and SOS modes.

The Lumitact LED torch is also zoomable. Rotate the head to create a wide beam or light or narrow it to a spotlight.

The torch comes with a 26650 battery that has a 5000mAh capacity. That’s enough for 12 hours of runtime at a medium brightness setting.

Four LED indicators light up to indicate remaining battery charge. It takes 6-8 hours to recharge the battery via the built-in USB-C port.

There is also an output port for charging devices, meaning you can use the torch as a power bank.

As for build quality, the Lumitact LED torch is made with a hardy but lightweight aluminium alloy. It has an IP67 rating and can withstand a fall from 3 metres.

The head of the torch can also double up as a weapon. You can also use it to break glass (e.g. to get out of a vehicle).

Accessories included with the Lumitact torch are three non-rechargeable AAA batteries (for backup), a lanyard, a keychain light, and a holster. 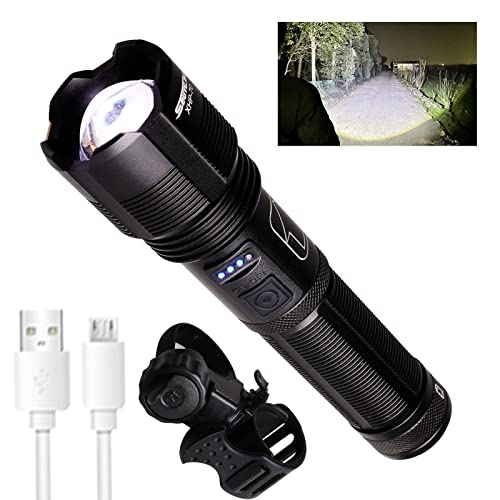 The Seutgjie rechargeable LED torch is another good choice if you are looking for a super bright torch for security.

It produces the same 10,000 lumens of light as the Lumitact torch. In fact, they share many features.

The Seutgjie torch has five illumination modes (three brightness levels plus strobe and SOS), a zoomable beam of light, and an IP67 water and dust rating.

The main difference is the battery. The Seutgjie torch comes with an 18650 lithium ion battery that has a capacity of 2600mAh.

So it has a shorter runtime compared to the Lumitact torch – 4-8 hours to be specific depending on the selected brightness level.

A set of four LED lights make it easy to track battery level.

The Seutgjie LED torch has a hardy aluminium alloy built that’s shockproof and solid enough to turn the torch into a self defence weapon when necessary.

The Seutgjie torch comes with two accessories: a USB cable to recharge the battery and a bike holder to attach the torch to your bicycle. 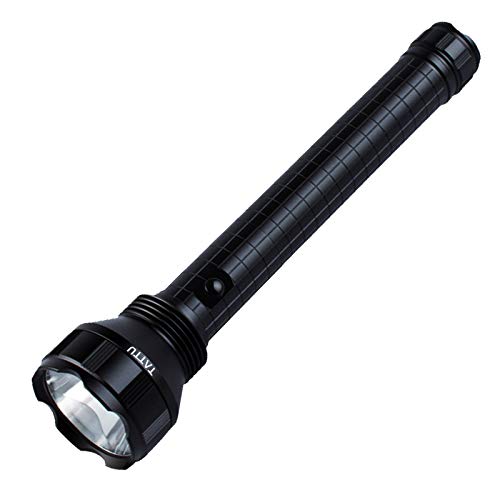 Looking to do some sleuthing? The iToncs 3-in-1 torch is perfect.

It also has a normal white flashlight that produces a maximum of 1200 lumens of light. So you can still use the torch normally.

The third function is a red light that can be handy for signalling.

By the way, this is a 2-pack. You’ll receive two torches. It is a good bargain.

The iToncs torches have seven light modes including blacklight, redlight, high, low, strobe, a white and red strobe (useful for signalling and disorientation), and a wide beam sidelight.

The sidelight uses LEDs mounted on the side of the torch. It’s handy when you are working.

The iToncs torches are zoomable, so you can get a focused spotlight or a wide diffused beam.

Another useful feature is the magnetic base. You can stick the torch onto a piece of metal and adjust the side or main light to illuminate a specific area. It’s great when you need hands free illumination.

Each of the iToncs torches uses an 18650 battery that lasts up to 30 hours when you are using the UV light.

The package includes a USB cable for recharging the torches, which takes about 3 hours. 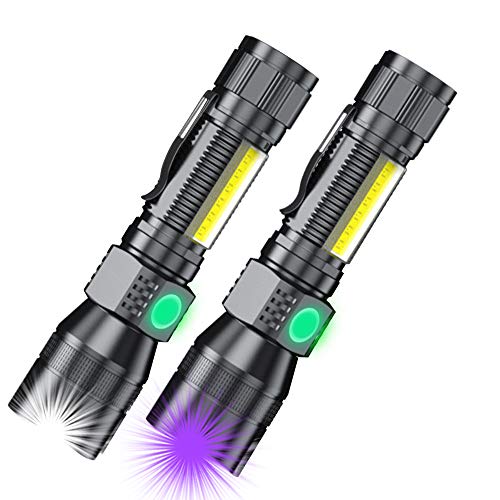 If you are looking for a torch that doubles up as a heavy duty tactical weapon, we recommend the Tattu D3 LED torch.

It’s longer and heavier than other torches, which makes it great for self defence and emergency situations like breaking a window.

The head is designed specifically for tactical applications while the shaft has a non-slip surface to ensure a strong grip.

You can use the Tattu torch in any kind of weather. It has an IP65 rating, meaning it can withstand heavy rain and snow.

You can also use the Tattu torch in hazardous environments. It’s designed with an anti-static switch that reduces the risk of an explosion.

As for the light itself, the LED chip in the Tattu torch produces 600 lumens of light, which is not as bright as the other torches in this guide, but bright enough for most security situations.

The beam is narrower but it reaches far, so it’s easy to keep an eye on your surroundings. And in case there’s an intruder, the beam is bright enough to temporarily blind and disorient them.

The Tattu torch runs on three D batteries, which are not included. You can use regular or rechargeable D cell batteries. 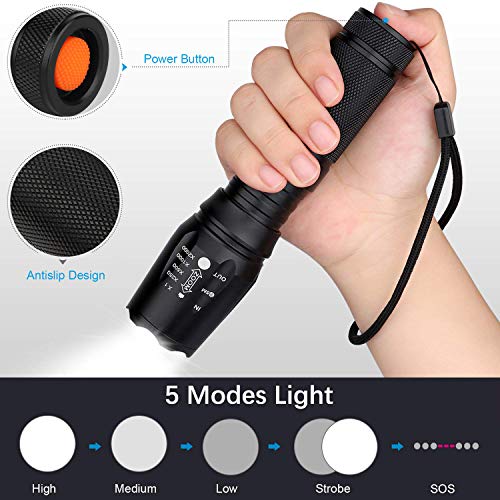 The Victoper 1000 Lumen LED torch is our top recommendation if you are shopping for a budget security torch.

It has fewer lumens than our other picks, but 1000 lumens is still very bright. You can see quite far especially when you zoom to a spotlight beam.

You can also set the beam to light up a wider area, which turns the torch into a floodlight.

A USB charger is included. Other accessories provided are a bike mount holder for cyclists, a belt holster, and a plastic carrying/storage box.