A water leak detector can save you thousands of pounds in water damage to your home. By detecting and alerting you to a leak, you can shut off the water and repair the leak before the water does any serious damage.

You can install a leak detector around water pipes or in places where there’s likely to be a leak such as under the sink or near the washing machine.

In this review, we recommend the best water leak detectors you can use at home and give you helpful tips on how to choose the right one for your needs.

A. Type of Detector

There are two main types of leak detectors; ultrasonic detectors that detect an abnormal flow of water and contact water alarms that detect a water leak on the floor or some other surface.

The first type wraps around a water pipe and detects water flow using an ultrasonic sensor. It can detect slow but steady flows of water, such as those caused by a leaky pipe or faucet.

It can also detect unusually large amounts of flowing water caused by a burst pipe or someone forgetting to turn off a faucet.

An ultrasonic detector is a good choice if you want to detect leakage from a specific pipe or outlet such as the faucet or shower. You attach the detector to the pipe leading to that outlet.

You can also use an ultrasonic detector to detect leakage from multiple outlets and pipes in the house. You attach the detector to the main water inlet pipe coming into the house.

A contact water leak detector uses the electrical conductivity of water to detect water pooling on the floor or a surface. The sensor sits on the floor so that it can come into contact with any leaking water. Some detectors come with a sensor cable that you can lay flat on the floor or wrap around a pipe.

A contact water detector is the best choice if you are concerned about leaks from appliances such as a washing machine or a water pump. You can also set the detector under the sink, in the basement or in the attic to detect leakage from a water pipe, the roof and other sources.

A water leak detector with WiFi connectivity will alert you on your smartphone if it detects a leak. You can even set it to alert your neighbours or friends just in case you are not around to shut off the water.

The main downside of a WiFi-connected water detector is reliability. If your home network is down, you’ll not receive an alert, which could lead to possible flooding.

A WiFi-connected water detector is also more expensive than a detector without wireless connectivity.

Whether the water detector has wireless connectivity or not, it should have a sound alert if it detects a leak. The alarm acts as a backup alert system when you are home.

For a non-wireless detector, it’s the only kind of alert you are going to get.

Make sure the alarm is loud enough to hear from another room. It should ideally be louder than 80 dB. If you are planning to put the detector in a closed spaces like under the sink or the attic, get one that’s even louder.

But for most homes, a multi pack will be more useful. You can install the water detect at multiple risk points around the house.

You may also get a better deal when you choose a multipack. 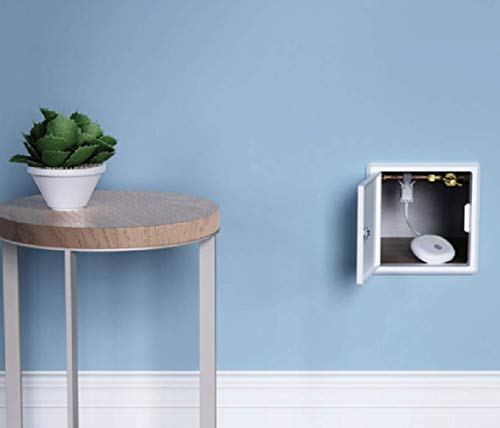 The Hive Leak Detector is the best choice if you are looking for a water detector with wireless connectivity.

Through the Hive app, you’ll receive alerts whenever the sensor detects a possible leak. You can even find a plumber on the Hive app to fix the problem right away.

The Hive leak detector clips onto your water pipe. Installation is a 10-minute DIY job (most of that time is spent connecting it to your router and downloading the app) and no plumbing is needed.

The detector analyses the flow of water through the pipe. It can detect leaks as well as dripping taps and send you an alert on your smartphone.

The detector will not send any alerts 24 hours after installation. It first has to learn about your plumbing and average water usage. After that, it’ll keep you in the loop if there’s something amiss.

In addition to leak alerts, the app provides water usage insights and helps you save on water.

One big downside is that the Hive leak detector doesn’t seem to have any audible alerts, so you have no choice but to use the wireless feature.

Another downside is that the detector is part of the Hive Leak subscription plan. You won’t be able to receive alerts until you subscribe to Hive’s leak plan that currently costs £3.99 a month.

Once you pay for the plan, you’ll receive an additional detector that you can use on another pipe. 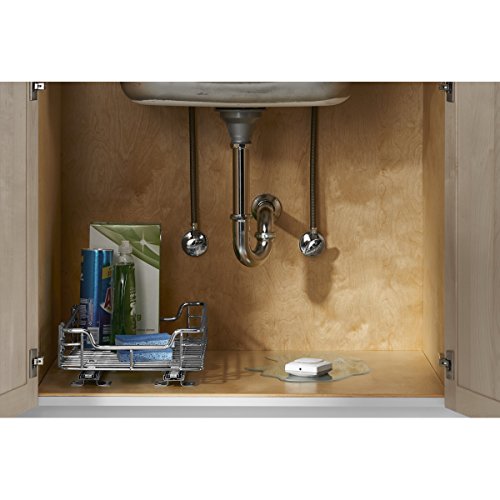 If you like the Hive Leak detector but aren’t jazzed by the idea of paying a monthly subscription, the Honeywell Home W1 is a great alternative.

The W1 water detector has wireless connectivity just like the Hive detector, so you can receive notifications on your phone wherever you are.

You can also have the detector send leak alerts to your nearby friends, family or neighbours just in case you are not around.

The Honeywell Home W1 consists of a box with a 1.2m cord attached to it. You wrap the cord around a pipe or lay it on the floor. If the cord comes into contact with water, it’ll send you an alert.

In addition, the box will sound a siren at 100 decibels, oud enough to hear wherever you are in the house.

The alarm is a great backup to the phone alerts. In case your network is down or you don’t want to use the wireless feature, you’ll still know when there’s a leak.

By the way, you can check the current humidity and temperature at any time using the app.

The Honeywell Home W1 runs on three AA batteries that are good for up to three years. 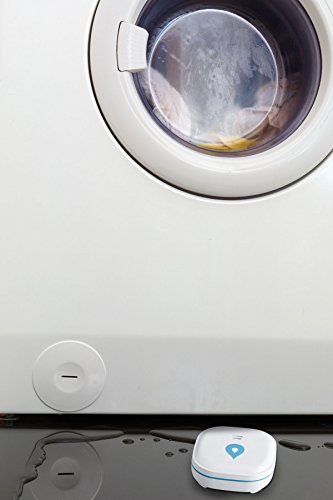 If you are looking for an affordable floor water detector, we recommend this two-pack rom Sebson. The company also sells a single pack and a three-pack. The three-pack saves you the most money.

These water alarms are small, so you can place them anywhere including under the sink, under a cabinet, next to the washing machine, or behind the toilet bowl.

If the contacts on the alarm touch any water, it’ll let out a shrill 85dB siren. We recommend testing the devices when you receive them to hear how loud they are. To test them, wet your finger and touch it to the contacts at the bottom of the device.

The alarms are very sensitive, so even a tiny leak on the floor will set them off, ensuring you catch problems as early as possible.

The Sebson water alarm has no wireless connectivity, so someone has to be home to hear it. On the upside, it’s much cheaper than wireless detectors.

Each Sebson alarm runs on a non-replaceable lithium battery, rather than the usual AA batteries. The battery lasts 10 years, at which time you should buy a new alarm. 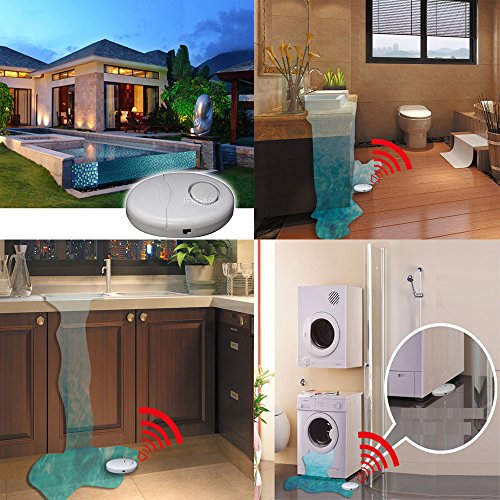 Some customers complain that the Sebson water alarm is not loud enough especially when you hide it under the sink or in a boiler room.

If you are looking a louder alarm that you can hear from any room, we recommend the Masswell water leak detector.

At 120dB, you’ll probably hear the alarm even when you are outside. The manufacturer says the alarm can be heard clearly from up to 90m.

This is a floor water detector. Place it near areas where there’s likely to be a leak such as the toilet, bathtub, sink or water pump.

The pack consists of three detectors, so you can monitor different areas of your home.

The detectors are super sensitive (you can test them yourself by touching a wet finger to the contacts), so they’ll detect even a small leak.

Each detector runs on an LR44 battery that lasts about one year. The manufacturer recommends testing the detectors every six months to make sure the batteries have not gone flat. 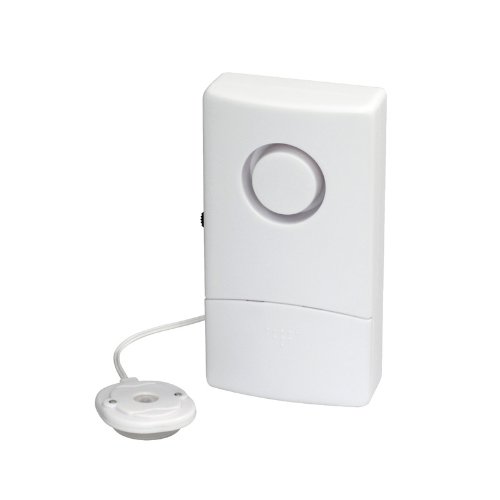 The Indexa water leak alarm consists of a main unit with a 98 dB siren and a 1-metre cable with a suction cup sensor attached at the end of it.

You can mount the main unit on the wall using the screws provided. The suction cup at the end of the cable is the one that detects water leaks. You can place it on the floor, attach it to the wall, or stick it onto an appliance or a water pipe.

The siren is pretty loud. You can hear it clearly from another room. If you don’t like the shrill siren, you can choose an equally loud but more comfortable melody.

The Indexa water alarm runs on a 9V battery. When the battery is low, the unit will chirp at set intervals to warn you.