Personal and business vans are frequent targets for thieves. That’s because vans, even modern ones, typically have lax security. Many don’t even have an alarm.

Even if the thief can’t drive away with the van, there’s probably valuable stuff inside they can steal.

Locking your van securely is the first step to preventing thieves from stealing your van or whatever is inside it. In this buying guide, we recommend the best van security locks and give you tips on how to buy the best locks for your van in the UK.

What To Look For In a Van Security Lock

The most popular way to secure van doors is a lock and hasp. It consists of a hidden shackle padlock set within a heavy duty hasp.

The hasp does two things: it mounts the entire lock assembly onto the van doors and it protects the padlock from attack.

A lock and hasp van lock is ideal for the rear double doors.

If you want to secure the side sliding doors, there are locks made specifically for them. The lock mounts onto the door and the body of the van. A sliding shackle locks and unlocks the door. These locks are also suitable for the rear double doors.

Sliding door locks tend to be more vulnerable to attacks. Someone with a screwdriver and hammer can force the lock open in a minute. We recommend supplementing this type of lock with a deadbolt or only using it for low to medium security situations.

Other types of van locks include dead bolts and slam locks that lock automatically when you slam the door. These provide excellent security but are harder to install. You may need to get the lock installed by a pro.

How Secure Is It?

The security of a van lock depends on its design and build quality.

That’s why dead bolts are so secure. Padlocks with protective hasps are also pretty secure.

As for build quality, steel locks are the best as they are the most difficult to attack. If you are getting a lock and hasp, make sure the hasp is made from thick steel that’s not easy to cut through.

This one is obvious – make sure the lock you get for your van can withstand rain and snow without rusting or jamming.

Check whether you can install the lock yourself or if you need to pay for professional installation.

If it’s a DIY lock, check what kind of tools you need and whether you need to purchase additional parts.

You can install most types of van locks yourself, but you’ll need a drill to make holes on the van doors. Everything else you need is usually provided including the screws.

If you want to secure more than one van door, we recommend getting keyed alike locks. This consists of a set of two or more locks that open and lock with the same key.

Just one set of keys operates all the locks, so you don’t have to carry a bunch of different keys around. 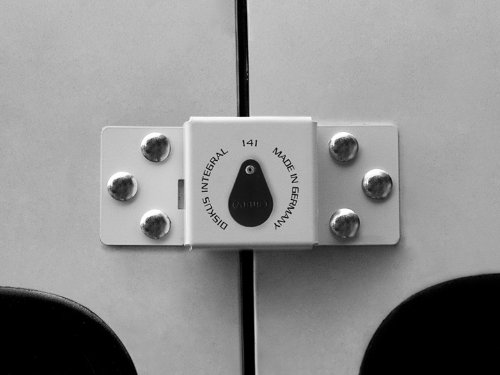 This Abus lock and hasp is the best choice for most vans. It’s designed to secure any kind of double doors that open outwards including van and shed doors.

The lock consists of a Diskus padlock with a hidden shackle and a steel hasp. When the lock is installed, the hasp completely covers the padlock with only a small hole left for accessing the keyhole. Even that is protected by a flap to keep rain and dust out.

The hasp is made from thick steel that’s difficult for thieves to break through.

Everything you need to install the ABUS integral van lock is provided including bolts. All you need is a drill. 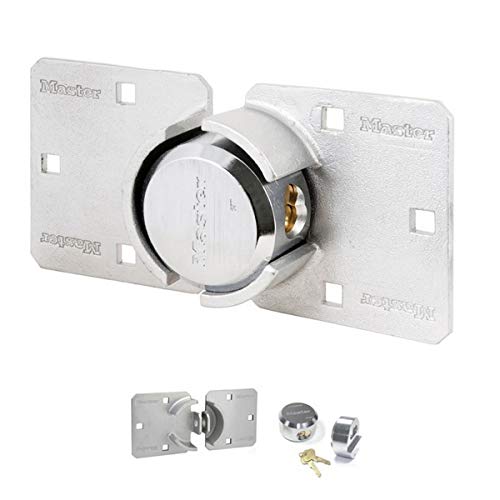 The Master Lock 736EURD lock and hasp is a cheaper alternative to the ABUS integral van lock.

With the Master Lock 736EURD, the hasp doesn’t completely cover the padlock. It only covers the sides. But it’s still pretty secure. Any thief will have a hard time attacking the padlock.

The padlock has a hidden shackle for further security. In addition, it uses a 6-pin cylinder to make it harder to pick.

As for build quality, the padlock has a tough zinc body while the protective hasp is made from hardened steel. Both the zinc and steel materials are highly resistant to weather damage such as corrosion.

Bolts for securing the hasp to the van doors are included in the package. All you need is a drill to make holes in the rear doors. 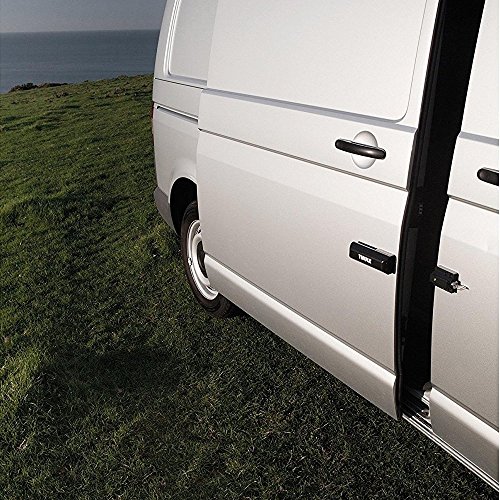 If you need to secure your van’s side sliding door, we recommend the Thule van lock. It can also be fitted to your van’s rear doors.

The lock consists of two sections that you mount on your van with the included bolts. If you are installing the lock on the side sliding door, mount one part on the door and the other on the van’s body. If it’s for the rear doors, each part mounts on individual doors.

A sliding lock connects the two parts, preventing anyone from forcing the door open even if they defeat the existing lock on your van.

Installation is similar to other van locks – you drill holes in your van and mount the lock. Make sure you install the lock on a flat surface to ensure the lock slides easily over both sections. A flat surface also ensures there’s no space under the lock where thieves can insert a crowbar and break the lock. 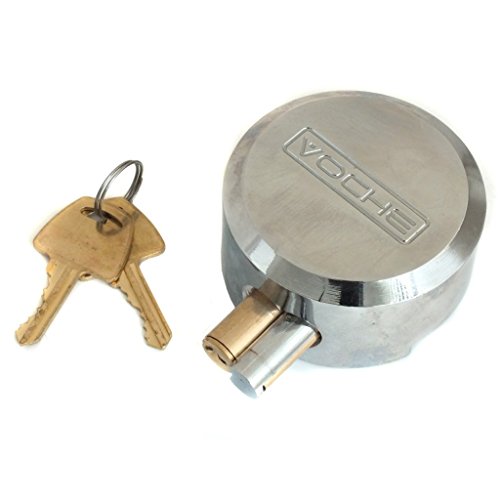 We recommend this Voche 2-pack if you are shopping for a pair of keyed alike van locks. Each lock consists of a lock and hasp, similar to the ABUS and Master locks.

The hasp goes around the side of the padlock, protecting it from bolt cutters and other attack tools.

The shackless padlock has a steel body, for added weather and attack protection. The hasp is also made from steel.

Each lock comes with six bolts and nuts for securing the hasp onto the van. Note that the locks can only be mounted on the rear double doors.

Included with the two lock sets are four keys. All the keys are similar and they operate both locks. 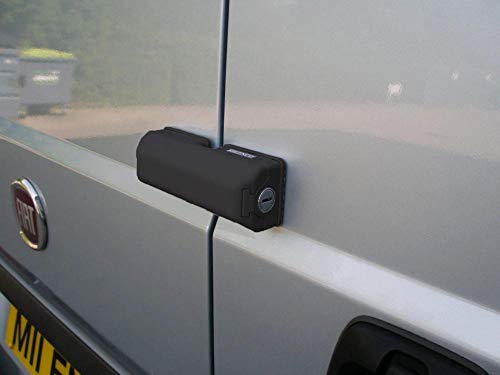 If you want a cheaper alternative to the Thule van door lock, try the Milenco van door deadlock.

This package comes with two keyed alike locks, so you can secure the side door as well as the rear doors and open them with one key.

The Milenco van door lock is a bit less secure compared to Thule, so we recommend using it only in low to medium security risk situations.

But if you often park your van in unsafe places, go with Thule instead or install the Milenco lock plus another lock like a deadbolt.

Similar to the Thule lock, the Milenco van lock needs to be mounted on a completely flat surface to ensure it works properly and prevent crowbar attacks.